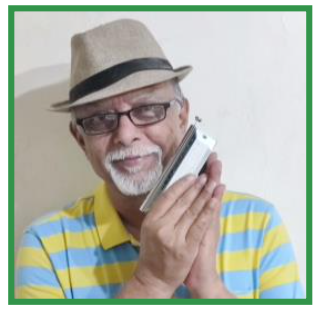 Niranjan Gulvady is a harmonica player and music teacher from Pune. He is an IIT Madras alumnus from 1976 and has served in senior positions in reputed companies in India, Africa, and the United States. Retiring at 60 from an active professional life, he took up harmonica as his instrument of choice for its numerous benefits. A self-taught musician, he has performed in old age homes, rotary clubs, and public stage performances in many cities in India. He calls it his musical pranayama, and he has a large fan following on Facebook.